ACO is distributing test strips to people in Ottawa so people who want to can find out if they’ve been exposed to fentanyl and/or check their sample for the presence of fentanyl.  For more information call or come by ACO to pick up a kit.

**Interested in using the strips to check your drugs for fentanyl?  There is a list of instructions and helpful things to know put together by the great folks at DanceSafe at the link here (scroll down for the instructions): https://dancesafe.org/product/fentanyl-test-strips-single-strip/ 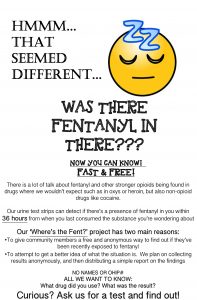 Use this kit to test for the presence of Ecstasy (MDMA, MDA, MDE), Speed (amphetamine) and other substances.
Our Ecstasy Test Kit includes what is also known as the “Marquis reagent”. It was the first test kit available and should be your primary test for Ecstasy (a.k.a. “Molly”).
Besides testing for Ecstasy and Speed, this kit will detect a range of other substances. A chart showing color reactions, as well as a multi-use testing vial, are also included with the kit.

Use this kit to test for the presence of Ketamine, PMA/PMMA and other substances.
Our Ketamine/PMA Test Kit contains what is also known as the “Mandelin reagent”. It is our latest test kit and can be used to screen for a range of substances including the deadly cuts PMA and PMMA.

Use this kit to test for the presence of opiates (heroin, morphine, codeine) and other substances.
Our Opiate Test Kit contains what is also known as the “Mecke test”. It’s great for use in conjunction with our primary Ecstasy Test Kit, as a double check for Ecstasy (MDMA, MDA, MDE).
Additionally, this test reacts distinctly with DXM, which is used in cough suppressants, but too often sold as fake Ecstasy. The test will yield a yellow color with DXM instead of dark blue/black, which is what you’d expect with real Ecstasy.

Use this Folin test kit to:

The Folin test should only be used after first testing with Marquis, Mandelin or Mecke (ideally all three). Folin is a good replacement for Simon’s reagent test.

Use this kit to test for the presence of LSD and other indoles.

The chemicals required to synthesize LSD are hard to come by. That’s why blotters often don’t contain LSD at all. Instead, they’ll contain psychedelic amphetamines like DOB, DOI, 2C-I-NBOMEe, which can have very harmful side effects.

Our LSD Test Kit contains what is also known as the “Ehrlich test” or “DMAB test”. It detects indoles such as LSD, DMT, 5-MeO-DMT, 5-MeO-DIPT, Psilocybin, Psilocin, AMT, and others.

Each reagent costs $20. Limited pay-what-you-can are available, just ask us. Cash only.

All ACO staff are now happy to get you the kits you’re looking for, just ask at the main reception.  We are usually stocked up, but we encourage you to call ahead if you can just to make sure. For more information or questions on drug checking, email haoua@aco-cso.ca and mar@aco-cso.ca  or call 613-238-5014.

*Due to the criminalization of substances, ACO is not able to offer drug checking services onsite.  We can assist with interpreting results.