On April 25th, 2012, the federal government announced massive changes to the Interim Federal Health Program (IFHP), which provides health insurance for refugees in Canada. Immediately after the decision was announced, doctors for refugee care and health/social workers joined together in solidarity to protest the cuts, which would leave an already vulnerable and marginalized population without access to essential health care. Following mounting public pressure from various community groups and allies, government-assisted refugees were exempted from the cuts. For all other refugees, the cuts came into effect on June 30th, 2012.

The aforementioned cuts deny refugees equitable access to essential health care, such as dental and vision care and medications, to mention a few. These cuts are a barrier in the work that the AIDS Committee of Ottawa does in providing education/awareness, support and outreach to refugees living with and at risk of HIV/AIDS in Ottawa and across the country.

A third National Day of Action will take place in Ottawa on June 16th at noon on Parliament Hill. Please join the AIDS Committee of Ottawa, its community members, partners and allies as we rally together to protest the cuts and stand in solidarity as we advocate for equitable access to essential health care for refugees in Canada.

The AIDS Committee of Ottawa encourages you to share your concerns over the cuts to refugee health care with your local MP. Contact information for all MPs can be found at:

For more information about the AIDS Committee of Ottawa, please visit us at www.aco-cso.ca

In light of last December’s unanimous Supreme Court ruling recognizing that the criminal laws that prohibit aspects of prostitution increase harm, of the decades of research and government reports supporting the Bedford decision and, more recently, of the publication of a new study in the prestigious British Medical Journal (BMJ) Open demonstrating the devastating impact the Swedish Model of asymmetrical criminalization has on sex workers, the AIDS Committee of Ottawa is disheartened by the new bill tabled by the Government yesterday.

Evidence unequivocally demonstrates that the criminalization of sex work, full or asymmetrical, and the accompanying lack of respect for sex workers’ human rights forces sex workers to work in circumstances that diminish their control over their working conditions and leaves them without the protective benefit of labour and health standards. In contrast, the decriminalization of sex work, achieved in New Zealand in 2003, has been associated with better and improved health both on an individual and on a community level.

The Global Commission on HIV/AIDS and the Law points out that legal environments that deny human rights to security provide fertile ground for the HIV/AIDS epidemic. The draft legislation proposes a model that criminalizes the purchase of sexual services, the advertisement of sexual services, and communication in public for the purpose of prostitution by anyone, and it effectively prohibits indoor sex work. Far from protecting vulnerable individuals, this approach reproduces the harms of our former prostitution laws which were struck down for violating sex workers’ constitutional right to security. Instead, recognizing the public health and safety benefits of decriminalizing both the selling and the purchase of sexual services, the World Health Organization and UNAIDS both recommend decriminalizing sex work.

We had high hopes that following the Bedford decision, our Government would ensure that new legislation for prostitution would be evidence based and prioritize the health and well-being of sex workers. The AIDS Committee is deeply disappointed that the new bill tabled yesterday falls short of that.

A summary and the BMJ Open publication is available here: http://www.gshi.cfenet.ubc.ca/crimclients

A summary and the constitutional analysis of the research is available here: http://www.pivotlegal.org/my_work

For more information or to book interviews:

Since 1985, the AIDS Committee of Ottawa (ACO) has worked to empower people living with HIV/AIDS and the PHA (persons with HIV/AIDS) community in Ottawa by promoting the well-being and quality of life of those living with or closely affected by HIV/AIDS.

The successful candidate for this position will bring to the job: a sex positive approach to HIV prevention; experience in social justice issues including working knowledge of the social determinants of health and the impact on those living with and at risk of HIV; an understanding and  respect for the diversity of women; belief and experience working within an anti-racist/anti-oppression framework; a willingness to advocate for women’s holistic health needs at a community and a provincial level; knowledge of working with women in the criminal justice system.

In your cover letter please discuss please discuss the challenges and opportunities that are relevant when working within an anti-racism anti oppressive framework.

We thank all who apply, however, only candidates who are short listed will be contacted for an interview.

Please submit your cover letter and CV, preferably in electronic (MS Word or PDF) format. The deadline to apply for this position is 4:00 pm, Friday, May 23, 2014

Manager of Education and Prevention

Study on HIV Medication Side Effects 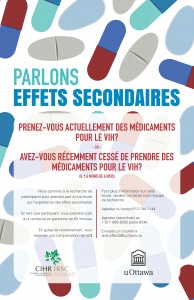 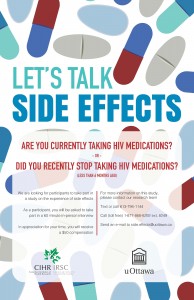 Attention all ACO members. You are invited to attend the Quarterly Meeting. We will have a sneak peak of the Bylaw policies. Board Members will be present to answer any questions. Drop by and have a coffee or tea and chat with us. All are welcome. Thank you.

Please join me in wishing Khaled all the best in his new position.

On behalf of the ACO Board of Directors,

Please note that this will be an informal meeting.

There will be no set agenda.

Board Members will be present to answer any questions.

Drop by and have a coffee and a chat with us.

Due to unforeseen circumstances, I regret to inform you that the AIDS Committee of Ottawa will not be moving to 240 Bank St.  The Landlord for the property has taken a stance that due to the nature of business that ACO conducts, they will not allow us to make renovations to the space that is needed for essential service/program delivery to our participants, i.e. kitchen facilities, laundry facilities, harm reduction etc. The AIDS Committee of Ottawa is committed to providing an office space to all our stakeholders that allows for optimal program and service delivery. We are in the process of exploring alternative options to follow through on our commitment as expeditiously as possible. We have met with the landlords in our current space, and they have informed us that we can continue occupying this space for as long as we need. Therefore, it will remain business as usual in our current space, as we are exploring different options. We will provide you with more information as it becomes available. In the meantime, please do not hesitate to contact me if you have any further questions/concerns. Thank you in advance for your patience and understanding in this matter. Sincerely, Khaled Salam Acting Executive Director AIDS Committee of Ottawa (613) 238-5014 ext. 234 ed@aco-cso.ca

Walk or run in support of the AIDS Committee of Ottawa! All of your contributions stay within your community and go directly to improving the lives of people living with and affected by HIV.

–        Check out our Community Fair, between 3:30pm and 7pm, and get to know some of the agencies that benefit from the Walk, as well as other valued community members

For more information, to register to fundraise, or to make a contribution, please visit http://www.aidswalkottawa.ca/