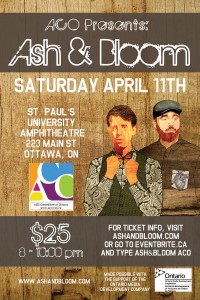 On Saturday, April 11, 2015 the AIDS Committee of Ottawa presents Ash & Bloom in concert at the Saint Paul University Ampitheatre to benefit ACO & people living with and affected by HIV and AIDS in Ottawa.

Canadian folk duo & 2015 Juno nominees Ash & Bloom (Matt McKenna and James Bloemendal) have quickly become a powerhouse duo; taking their music worldwide and being named an “act to watch” by press. Ash & Bloom have crafted a sound that requires two people playing and singing together, a sound reminiscent of Simon & Garfunkel but with a modern day, Barenaked Ladies-esque twist.

In 2013, they joined singer-songwriter Justin Hines on the Vehicle of Change Tour from June to October, travelling over 20,000 kms across North America. 100% of ticket sales from each show went back to local charities and the band successfully helped raise funds and awareness in each city they visited.

Light refreshments will be provided

Get to know them more on apt613: http://apt613.ca/ash-bloom-an-expression-of-life-through-music/

++There will be an opportunity to meet the band Ash and Bloom, after the concert++